By ALI NADERZAD The Lumiere theatre, which seats 2,200, was filled to the gills this morning. Everyone came early to get a first look at el ombre manchego Pedro Almodovar’s new film Los Abrazos Rotos, ie., Broken Embraces. It’s rather an important movie because Almodovar hasn’t been in Cannes since presenting Volver here in 2006 and he is adored by cinephiles. Also he once again partners up with his dainty alter-ego Penelope Cruz. One of the endearing things about Almodovar the director is that he often acts as a film school pupil, and quotes from this or that film in his own projects. As has been his habit in the past, in Broken he gives a nod to great film directors of the past, most notably Hitchcock, Billy Wilder and Rossellini. Almodovar also loves film noir as he’s been known to say. 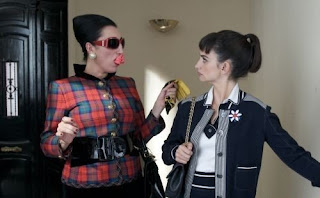 Broken Embraces, which lasts two hours and nine minutes, is the movie-within-the-movie and is rife with well-known narrative elements and devices, ie., classic film references and vastly complicated human dramas veiled in secrecy, furtive stares and jealousy. Mateo Blanco is an author who writes under the pseudonym of Harry Caine. After some rivalry between the two personalities living within him, Blanco becomes Caine permanently. Amusingly, Caine happens to be a blind writer so Mateo Blanco the writer becomes Harry Caine the blind author. Introduce some beautiful female protagonists, a rich-old corporate executive and the kind of vengeful jealousy only Iberians are capable of and you get fireworks of rivalries, attraction and rejection and of course, broken hearts.

The screenplay that Harry Caine is currently working on,”Girls and suitcases” is a comedy, which contrasts with the dramatic tone of Broken Embraces. Almodovar commented that, “when I was writing the script I decided that Mateo Blanco would be filming a comedy because it is the opposite genre to the drama the protagonists are living. In that way their problems would take on greater relevance, and the efforts, for example, by Lena (Cruz) to achieve the light, sparkling tone that comedy demands are more obvious and pathetic.”

Broken Embraces lasts for over two hours, as I indicated earlier in this article. Also, things become a little glib because Almodovar emulates films of the past in such an outwardly way. Films may lose their novelty as our memory of them fades into the past and images blur. Scenes from Antichrist by Lars Von Trier are going to stay with me for a while, because of their originality. Almodovar’s films resemble each other too frequently not to try and come up with something very new each time. But in spite of this, it is still a pleasure to watch Broken Embraces. Incidentally, since Volver I have noticed how Almodovar’s films look more polished and a little too manicured. A Pedro Almodovar movie looks good even–or because–when it’s slightly ragged (the example I’m thinking of the most is Women on the Verge of a Nervous Breakdown), because it bears a strong imprimatur; the manchegan director has a recognizable narrative and dramatic style even though he uses so much imitation.

Broken Embraces, which is presented as part of the competition program, more than likely will not take home any prizes although Almodovar reasserts his relevance.

Cannot be reprinted without permission from site owner
Tagged With: PEDRO ALMODOVAR BROKEN EMBRACES
< WHO WILL BE THE WINNER AT CANNES?
Cannes ’09 – Antichrist revs up festival-goers >